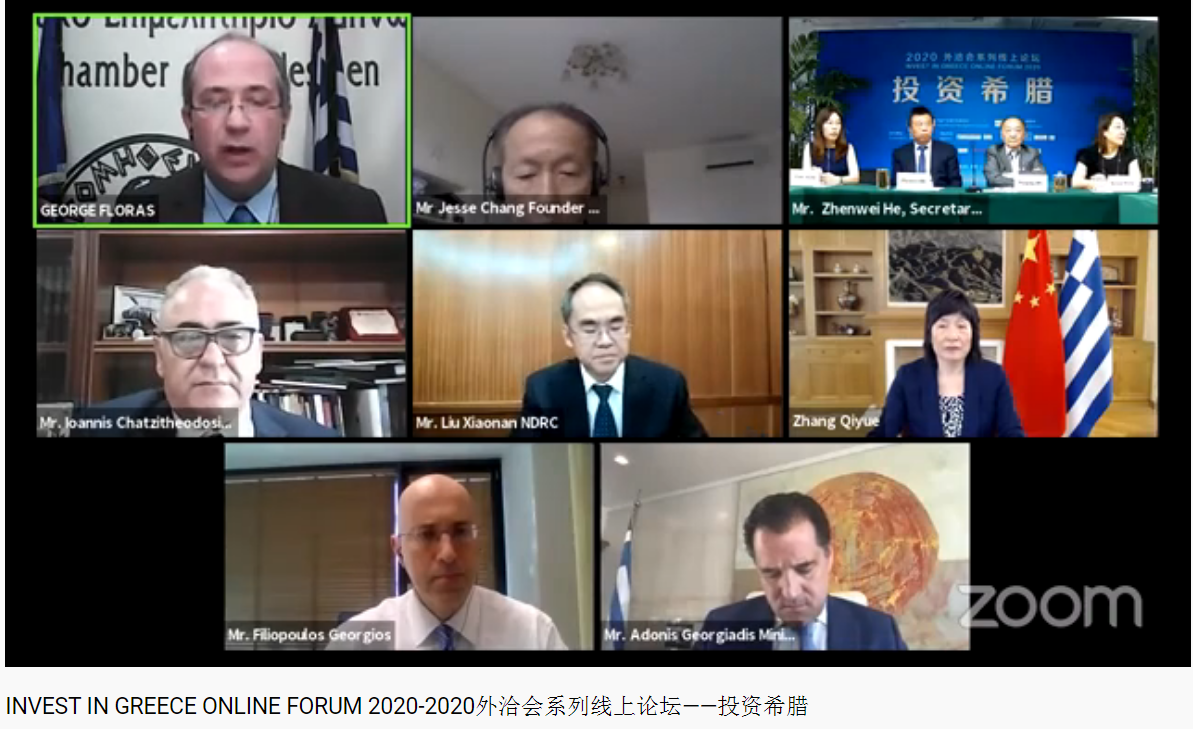 INVEST IN GREECE FORUM 2020, which was organized online on June 4, 2020, was completed with great success. More than 400 Chinese, executives of companies investing overseas, participated in the 3-hour Forum and were informed about the possibilities that Greece offers today to foreign investors.

It is the first time that a similar online investment forum has been organized for both the Greek side and China, as the pandemic has led to new forms of communication. The Forum provided simultaneous English-Chinese interpretations, greatly facilitating the participation of the Chinese.

INVEST IN GREECE FORUM 2020 was organized by BELT AND ROAD ASSOCIATES, the China Overseas Development Association (CODA) of the Ministry of Development of China (NDRC) and the ChinaGoAbroad platform. The Forum has already received wide publicity in China, with detailed reports on the speeches of Greek and Chinese guests.

The Forum began with the greetings of the Minister of Development and Investment Mr. Georgiadis, the representative of the Ministry of Development of China (NDRC), responsible for foreign investment Mr. Liu Xiaonan, the Ambassador of China to Greece Mr. Zhang Qiyue, the Ambassador of Greece in China Mr. Iliopoulos, the CEO of Enterprise Greece Mr. George Filiopoulos and the President of the Athens Chamber of Commerce Mr. Giannis Chatzitheodosiou.

The coordination of INVEST IN GREECE FORUM 2020 was done by George Floras, managing partner of BELT AND ROAD ASSOCIATES.

In his speech, Mr. Georgiadis addressed an invitation to Chinese investors and reaffirmed the Government’s commitment to completing the investment plans of Chinese companies, which have been launched but have been suspended due to the pandemic crisis, while stressing that Greece is particularly encouraging investment. In his speech, the Minister of Development and Investment made special reference to the “Belt and Road Initiative” as well as to emblematic Chinese investments in Greece, while, at the same time, reminded of the long-standing ties of friendship and respect between the two countries.

“China attaches great importance to cooperation with Greece and the cooperation between the two ancient civilizations has an explosive vitality in the new era. Since the first summit of international cooperation “Belt and Road” in 2017, the NDRC and the Greek Ministry of Development and Investment have signed a three-year plan for cooperation in key areas of the two countries and set up a committee to coordinate cooperation. So far, three meetings have taken place and both sides have shown a strong willingness to cooperate. The two countries have made significant progress in key areas of co-operation, showing great potential. For example, COSCO Shipping’s annual performance increased from 880,000 TEUs in 2010 to 5.8 million TEUs in 2019. In the world rankings, the port of Piraeus rose from 93rd to 32nd place. Creating, directly and indirectly, 13,000 jobs has become a good example of cooperation between the two countries. And more and more Chinese companies are monitoring and participating in collaboration projects in various sectors in Greece.” Mr. Liu Xiaonan mentioned three points regarding the Chinese-Greek cooperation in key areas. First, to promote bilateral cooperation based on the list of key projects signed between the two sides in November 2019 in Athens. In the new round of the three-year cooperation plan, the two sides agreed to focus on the five areas of Transport, Energy, Information and Communication, Industry and Research and Development and to finance partnerships to achieve better results. Secondly, to improve the role of the Financial Institutions in order to support the cooperation plans. Four Chinese banks are already active, either through their own offices or through partnerships, and we encourage them to find practical ways to finance projects. And third is to support the important role of the China-Europe Continental Express route, i.e. the route from China to Central Europe, through the Port of Piraeus and the Greek-European railway connection. The China-Europe Continental Express starts from the ports of China, reaches the port of Suez through the Suez and Mediterranean canals, and then reaches the central region of Europe via the Greek-Northern Macedonian and Serbian railways.

After several years of active efforts by COSCO Shipping and countries along the route, including Greece, China-Europe Continental Express has increasingly become a new cargo channel between China and Europe. China is willing to work with Greece and other countries along the line to accelerate the upgrade of infrastructure along the line, improve customs clearance and reduce customs costs. ”

In her speech, the Ambassador of China to Greece, Mr. Zhang Qiyue, noted that China and Greece are important partners in the joint construction of the “Belt and Road” initiative, Greece is the first European country to sign a memorandum of cooperation with the government of China for the “Belt and Road” initiative. The port of Piraeus and other projects have become a good example of win-win cooperation in the “Belt and Road” initiative. Last year, Greece also became a full member of the “17 + 1 Cooperation”. In November last year, President Xi Jinping successfully paid a visit to Greece, leading Chinese-Greek relations to a new era. During the fight against the epidemic, the governments and people of the two countries supported each other and worked together to further deepen the friendship and establish a comprehensive strategic partnership. He also laid a solid foundation for the two countries to deepen co-operation in various areas in the post-epidemic era. Finally, I would like to emphasize that the greatest inspiration from this epidemic is that we live in the same global village and all countries share a close relationship and are closely connected. Today, what we need to do is not “disconnect”, but we need to tighten co-operation, seize opportunities for co-operation, make the development potential a reality and let co-operation pay off. ”

The Ambassador of Greece to China, Mr. George Iliopoulos, referred in particular to the investment opportunities in the Greek energy sector and said: “The main priority of our energy policy is to find, secure and manage energy resources in a way that ensures security, smooth and reliable coverage of the country’s energy needs. We have a very ambitious and realistic plan to drastically reduce the share of lignite in electricity generation and address long-term environmental issues, achieving earlier points of reference for the EU-Paris Agreement. Our government’s energy program requires a share of Renewable Energy, at least 35% of total energy consumption in the coming years.

Solar, wind and hydroelectric power are the most suitable sources of energy from renewable sources. In Greece, there are places with more than 300 days of sunshine a year, while strong winds blow in the Aegean and in many parts of the mainland. We must do everything possible to seize the resources of these two resources, producing clean and cheap energy for both domestic and foreign markets. In fact, you may know that the second largest Chinese investment in Greece is the acquisition of a 24% stake in the independent electricity transmission company in Greece, IPTO, by China State Grid International Development Ltd. The State Grid investment is worth 320 million euros. It is no coincidence that the action is one of the five areas of common interest identified in the Cooperation Plan 2020-2022, which was implemented under the supervision of Minister Georgiadis and Commissioner Ning. In this recently updated plan, Greece and China have pledged to promote cooperation in nine energy projects, mainly in the field of Renewable Energy, and many Chinese companies have already been involved in this area. There is considerable and successful history in our energy cooperation, and our government’s new energy policy guarantees a significant amount of additional investment opportunities. ”

Mr. Nikos Stamou from the Directorate for the Promotion and Investment Support of Enterprise Greece, presented the investment environment of Greece and the incentives given to foreign investors. The Secretary General of Private Investment and PPP Mr. Nikos Mantzoufas presented the Infrastructure sector and the possibilities for investments by foreign investors. Ms. Nektaria Karakatsani, a member of Regulatory Authority of Energy RAE, presented in detail the energy sectors that offer significant investment opportunities in the future.

Afterwards, Mr. Vangelis Kteniadis, owner and CEO of V SQUARED DEVELOPMENT, Gold Sponsor of the Forum, presented the GOLDEN VISA program. This was followed by Ms. Anamaria Kallianou, Director of Investment Relations of HRDF, who presented the Energy Portfolio of HRDF with an emphasis on LNG projects in Kavala, ELPE and PPC (DEDDIE). The forum closed with the presentation of Mr. Sophocles Pitarokoilis, Vice President of PANAGAKOS GROUP, for the Group’s wind and photovoltaic projects.

INVEST IN GREECE FORUM 2020 was held under the auspices of ENTERPRISE GREECE and the ATHENS CHAMBER OF TRADESMEN.

REFERENCES TO THE CHINESE PRESS

SEE THE VIDEO OF INVEST IN GREECE FORUM 2020

this is the link of forum video record in Chinese

this is the link of forum record in English