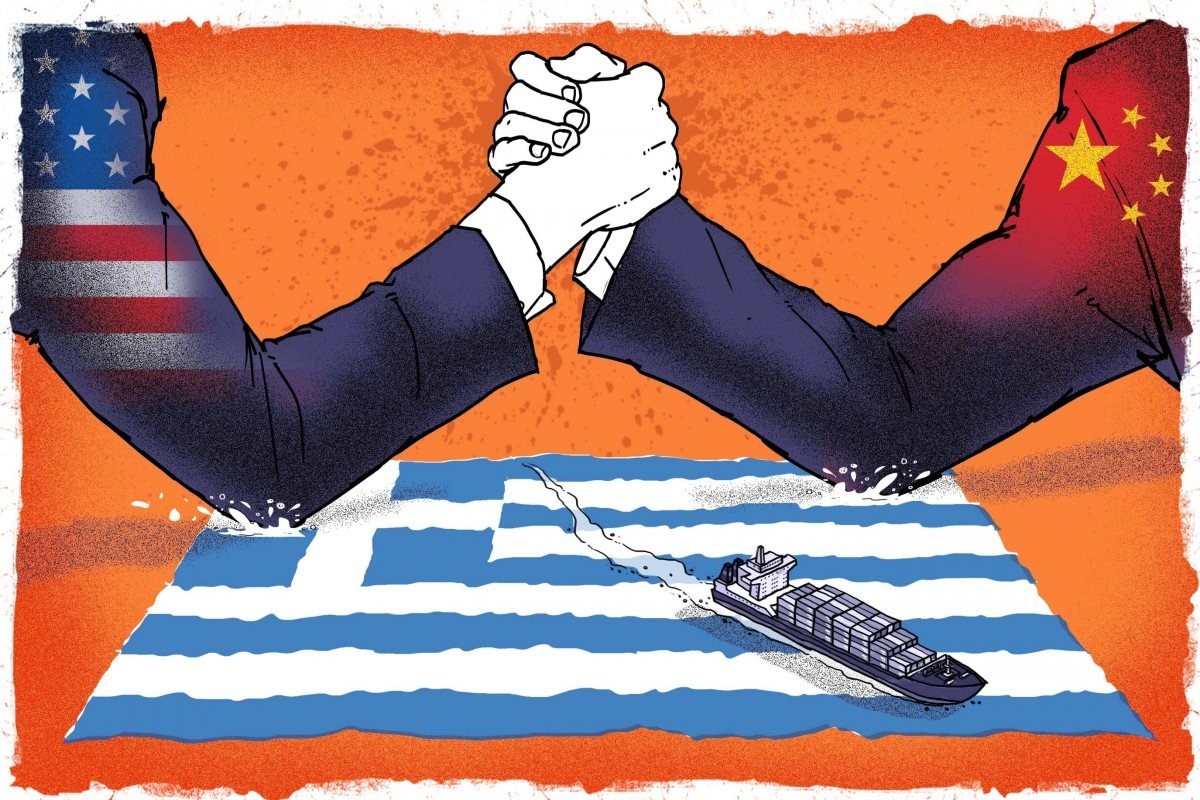 The truth is what Stuart Lau’s article in the SOUTH CHINA MORNING POST describes. The United States is pressing the Greek government to block the entry of Chinese companies into Greece (as they do in so many other countries). It is also true that the Greek government wants foreign investment and has developed particularly good relations with China. BELT AND ROAD ASSOCIATES is the “hidden weapon” in the Chinese effort to invest in Greece. It provides daily information to Chinese companies on investment opportunities in Greece and supports major Chinese companies to participate in Government tenders or to approach Greek companies that want foreign investors.

The following is the relevant article:

As Europe was fighting a seemingly unmanageable Covid-19 outbreak in September, Greece’s Prime Minister Kyriakos Mitsotakis rolled out the red carpet for an inconspicuous foreign guest.

Neither a state leader nor a health expert called in to fight the virus, Adam Boehler heads the US International Development Finance Corporation, created last year and hailed by Washington as an alternative to China’s Belt and Road Initiative, the multibillion-dollar Beijing plan to fund infrastructure projects and expand trade ties around the world.

Fresh in his job, Boehler’s visit – quickly followed by US Secretary of State Mike Pompeo – was a clear signal of Washington’s concern over China’s expanding interest and influence in Europe, especially Greece. The country is home to one of the most iconic belt and road projects: the port of Piraeus, among Europe’s biggest and now controlled by China’s state-owned shipping giant Cosco.

Greece may be on the fringe of the European Union geographically, but it has become a key focus in the intensifying scramble for global influence between the US and China, which has spilled over into Europe, Southeast Asia, Africa and Latin America.

“China itself has identified [Greece] as the dragon’s head of the Belt and Road Initiative in Europe,” the US ambassador to Greece, Geoffrey Pyatt, told local newspaper I Kathimerini earlier this year. “We’re going to have a debate in terms of how we get the balance right in dealing with the challenge that China presents. China’s not going to go away.”

Boehler’s specific goal was to convince Mitsotakis that Greece’s second-largest but near-bankrupt shipyard in Elefsina – just 13km west of Piraeus – should accept investment from the US body, lest it “fall into the wrong hands”, according to a diplomatic source briefed on the matter, who declined to be identified.

US companies are reportedly interested in buying controlling stakes in Alexandroupoli port, according to local media. Alexandroupoli is being privatised by the Greek state and, while much smaller than Piraeus, is strategically located near the border with Turkey.

Washington has piled the pressure on Greece regarding the future of Piraeus, said to be the oldest port in Europe and just 12km (7 miles) from the capital Athens. That showed when Cosco found itself struggling to get approval from Greek authorities to build a fourth container terminal in the port.

The Chinese shipping giant has said it will invest 600 million euros (US$698 million) in the Piraeus port to make it the biggest commercial shipping hub in Europe. This would also allow it to boost its stake in the port to 67 per cent from the 51 per cent it bought in 2016 for 280.5 million euros under a deal with HRADF, Greece’s privatisation agency.

Greek officials have reassured Beijing that the delay in expansion approval was caused by local opposition based on archaeological and environmental concerns, not global politics.

A Greek shipbuilder in Piraeus told the South China Morning Post that Cosco’s push for the expansion was backed by intense lobbying from the Chinese embassy in Athens, including ambassador Zhang Qiyue. “It’s as much a commercial project as a political mission for China,” he said on condition of anonymity.

Less than two weeks before President Xi Jinping held a video conference with EU leaders in September, his top diplomat, Politburo member Yang Jiechi, was dispatched to Athens to meet with Mitsotakis to gauge the political mood.

“The Piraeus project is an important symbol of our cooperation, as well as an important project that connects the Belt and Road initiative with your country’s development plan,” Yang told a nodding Mitsotakis in the prime minister’s office, as his remarks were broadcast live on the Greek leader’s Facebook account.

However, Boehler’s Greek visit, also in September, has created a new mood around the future of Piraeus, one very different from when Xi toured the port in November last year while on a state visit to Athens. China’s state-run news agency Xinhua described Xi as “delighted” with the “successful example of China-Greece cooperation”.

The mood is also markedly different from when a previous Greek government in 2017 blocked the EU’s statement at the United Nations criticising China’s human rights violations, a move derided in Brussels as Athens kowtowing to Beijing.

Last year, Athens joined China’s so-called 17+1 group to boost trade and investment in eastern and central European countries, aiming to expand exports to the world‘s second largest economy, against which it runs a trade deficit of about 2.7 billion euros.

Dimitris Keridis, a member of the Greek parliament from the current ruling party, New Democracy, said while Greece did not yet have to pick sides, the choice would be a clear one if it would need to be made one day. “We appreciate the Chinese investment in Greece which we want to see grow and become even more important,” he said.

“But, of course, our relationship with the US is very long, very historic, very important, and multifaceted because it includes a vibrant Greek diaspora in America. Like many other countries in Europe, we have welcomed the Chinese investment but … not at the cost of the Atlantic orientation.”

“Right now, the Americans have the upper hand, [whereas] the Chinese are losing ground after all this spectacular kinship between Greece and China a few years back,” said Plamen Tonchev, head of the Athens-based Institute of International Economic Relations’ Asia unit. “China is still in, they are not out, but they are certainly down.”

Analysts say the Greek attitude mirrors the EU’s increasingly cautious approach to relations with China – prompted by Beijing’s initial handling of the Covid-19 pandemic, imposition of a national security law on Hong Kong, human rights in Xinjiang, and the lack of progress in a Europe-China investment treaty.

However, Greece is also reliant on Washington, given the security guarantee it needs in the face of escalating hostility in the Mediterranean with Turkey under strongman president, Recep Tayyip Erdogan.

For the US, the priorities with Greece are to lessen its economic dependence on China, shore up its defence capabilities against Turkey, fend off Russia’s lingering influence in the region, and develop Greek ports as hubs to transport US energy to eastern and central Europe.

Protocol watchers noted that when Pompeo arrived, right after Yang’s visit in September, he was hosted by the Greek prime minister at his family home on the island of Crete – an exceptional arrangement for someone who is not a fellow head of government.

“It’s very safe to say that the relationship between our two countries is at an all-time high. It’s getting stronger,” Pompeo said on the island, alongside his host. As for the talks with the Greek leader, Pompeo said: “I raised the Chinese Communist Party’s attempts to use economic power here and in the region to gain strategic leverage over European democracies.”

In return, Greece got what it wanted from Pompeo, who announced that the USS Hershel Williams, one of the US navy’s newest and largest warships, would be stationed at Crete.

“The sky’s the limit regarding what we can achieve together,” said Mitsotakis – who was educated at Stanford and Harvard – as he turned to his second official US guest in a month to add: “Mr Secretary of State, dear friend Mike, your visit here has forged another strong link to the historic ties that bind Greece and the US.”